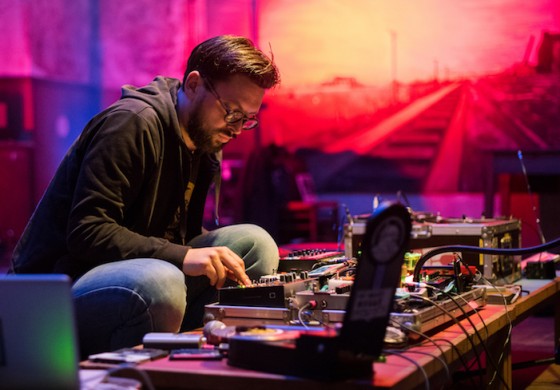 Korhan Erel is a Berlin-based sound creator who plays computer, electronic devices in improvisation groups, jazz and other genres. www.korhanerel.com

Achim Zepezauer started to buy vinyl when he was eight years old. At age 19 he studied fine arts in the Netherlands and made a decision to primarily channel this multidisciplinary sensibility into his work as a sound artist, improvisor and songwriter after choosing to leave the academy. Now based in Dortmund, Germany, some of his achievements have been: awarded the jazzwerkruhr prize in 2006 for his DVD „Kuhzunft“ // changing of his name from Kämper to Zepezauer // establishment of the first free form college radio show in the ruhr area (2005 to present) // long-time member of the innovative large band / improv collective „The Dorf“ // curation of the experimental concert series „mex“ at the Künstlerhaus Dortmund // completely DIY production of his CD „Choose Your Favorite Nothing“ featuring original artwork in handmade limited edition // currently also his DIY release „Zentrifuge“ with solo songs and electronics with handmade unique cardboard sleeves // as well as his mindbreaking „Cardtalk“ - project featuring an ancient cardboard phonograph with recycled CD that has sound carved onto its surface // releasing vinyl, cassettes and CDs in many settings like Knu! / Das Behälter / Hampelstern-Terzett / Elsewhere… www.kuhzunft.com

Jim Campbell (aka the preterite) is a turntapelist, for lack of a better term. Inspired by proponents of experimental work with vinyl and early tape, Cagean chance practices and both cosmic and free sounds, the Berlin-based American artist built a one-of-a-kind instrument out of relics of the tape age, his “cassette scratch orchestra”, composed of cast-off phrase trainers, original effects, a re-purposed and prepared analog cassette multitracker and piles of found and mostly self-dubbed tapes of his own creation. Campbell works in a variety of contexts, most notably solo as “the preterite”, improvising freely, scratching abstract-emotive tone poems on the fly. He is also engaged in intuitive approaches to live sampling and processing of acoustic instruments and experiments with augmented reality that involve ad-hoc temporary installations in uncommon settings and on-site embedded field recording. In addition, Campbell is also a member of the duo Tape Measure Kid and the large improvising collective The Dorf with releases on Denovali and Leo Records among other labels. He has performed with a vast number of artists approaching improvisation from wildly diverse angles, including Caspar Brötzmann, Elephant Power, Claus Van Bebber and traditional Hsain Wain ensemble players from Myanamar. He has also toured Eastern Europe (with Hartware Medienkunstverein) and Southeast Asia (with the Goethe Institut). www.the-preterite.com